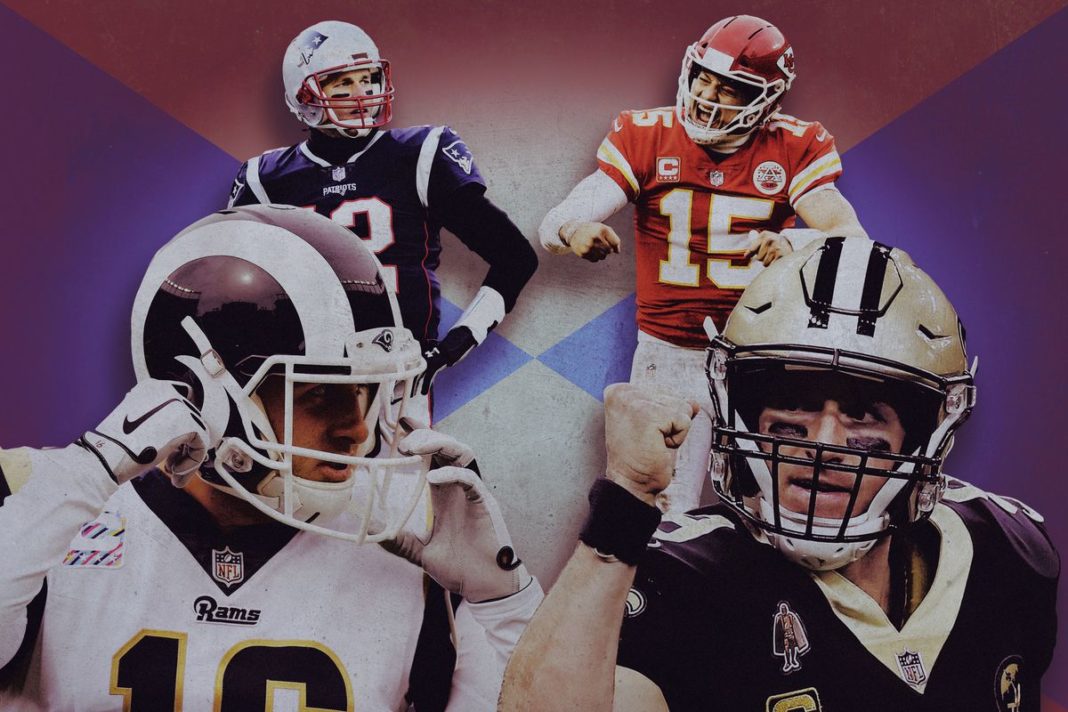 The stage is set. After two wild championship games, the Super Bowl matchup is official. Well, at least today it is. Two great head coaches, two terrific quarterbacks, and two outstanding teams will now meet on the NFL’s biggest stage. Here is a roundup on how the winning teams fared in the championship round and what the results mean for the final game in Atlanta:

Total madness. A game that seemed pretty normal through three quarters turned in one of the most controversial outcomes in NFL history. The Saints looked in control early, as two Wil Lutz field goals put them up 6-0 midway through the first quarter. After the Rams ensuing possession stalled, Drew Brees led an 8-play, 68-yard drive that ended with a 5-yard TD pass to Garrett Griffin, a tight end that had been activated from the practice squad just days before the game. Brees finished the game 26/40, throwing for 249 yards and 2 TDs, along with 1 INT. After one quarter in the books, the Saints were in total command, leading 13-0.

The second quarter was a different story. A long drive led by Jared Goff ended in a 36-yard FG by Los Angeles kicker Greg Zuerlein. Then, right before the end of the half, Todd Gurley finished off an 81-yard drive with a 6-yard TD run, cutting the Saints lead to 13-10 at the break. The Pro Bowl running back for Los Angeles struggled to get anything going for the remainder of the game, however, as he finished with only 10 rushing yards and 1 TD on 4 carries. After a quick three-and-out for Los Angeles to start the second half, New Orleans had a great opportunity to take back the momentum. Brees and the Saints offense marched down the field, finishing their terrific drive with a 2-yard TD pass to Taysom Hill. However, on the following possession, Goff and the Rams responded, once again making it a 3-point game after a 1-yard TD pass from Jared Goff to Tyler Higbee. After three mildly entertaining quarters, New Orleans led 20-17.

Both teams had an opportunity at the start of the final quarter to put points on the board. However, the first two drives ended in punts. On the Rams’ next possession, Goff and the Los Angeles offense drove all the way down inside the red zone, but penalties and ineffective rushing attempts forced them to settle for a 24-yard field goal. The young Rams quarterback finished the game 25/40, throwing for 297 yards and 1 TD, to go along with 1 INT. At this point, the game was tied 20-20, with just over 5 minutes left to play in regulation.

On the following drive, New Orleans methodically moved down the field, and after a sequence of completions by Drew Brees, were in field goal range and had an opportunity to control the tempo with just under two minutes remaining. A first down on a 3rd & 10 play would allow New Orleans to run the clock down with just enough time for Wil Lutz to hit the game-winning field goal and send Sean Payton’s squad to Atlanta. Instead, Brees threw a pass to wide receiver Tommylee Lewis out of the backfield. While Lewis was going for the ball, Rams cornerback Nickell Robey-Coleman slammed right into him, decking the ball-catcher without even turning around to see where the ball was thrown. On a blatant pass interference call, no flags were thrown. The Saints were forced to kick a field goal, putting them up 23-20 with 1:41 remaining. On the next drive, with plenty of time to make something happen, Los Angeles ended regulation on a game-tying field goal to send the NFC Title Game into overtime.

The coin toss to begin overtime gave New Orleans the ball to start. However, Drew Brees’ third pass attempt of the extra period ended up in the hands of Rams defensive back John Johnson and gave Los Angeles all of the momentum. With great field position, Goff did not need to do very much to put his team in a position to advance to the Super Bowl. After getting a first down to begin the drive, the Rams offense stalled, forcing them to bring out Greg Zuerlein for the game-winning 57-yard field goal attempt. One of the best kickers in the NFL, Zuerlein drilled the kick up the middle of the uprights, sending the Los Angeles Rams to their first Super Bowl appearance since 2001. The NFC Champions will now face Tom Brady and the New England Patriots in Atlanta on February 3rd.

Brady. Mahomes. This was the rematch that everybody wanted to see after New England won round one of the duel 43-40 in Foxborough early in the regular season.  This time around, the game was in Kansas City at Arrowhead Stadium, one of the most iconic venues in sports. However, this had little impact on the Patriots early in the contest. Brady and company marched down the field on their first possession, ending a 15-play, 80-yard drive with a 1-yard TD run by Sony Michel. The New England rookie running back was a problem all night long for the Chiefs defense, as he finished with 113 rushing yards and 2 TD on 29 carries. Bill Belichick’s defense was terrific throughout the first half, forcing the Chiefs offense to punt on all three of their drives. Brady and the Patriots were also able to tack on another touchdown before the break, as a 29-yard TD pass to Phillip Dorsett extended New England’s lead to 14-0 heading into halftime. The 5-time Super Bowl champion finished the game 30/46, passing for 348 yards and 1 TD while tossing 2 INTs.

The Chiefs had the ball to start the second half and wasted no time putting points on the board. Patrick Mahomes guided Kansas City, 74 yards down the field in only four plays, finishing the terrific drive off with a 12-yard touchdown pass to All-Pro tight end Travis Kelce. After consecutive punts, New England stretched the lead back to 10 on a 47-yard field goal by Stephen Gostkowski with only a few minutes remaining in the third quarter. Entering the final period of regulation, the Patriots led 17-7.

A game that was extremely low scoring through three quarters became an offensive slugfest in the final period. Mahomes quickly cut the Chiefs’ deficit to three, as a 1-yard TD pass to Damien Williams made it 17-14. Two possessions later, following an interception by Brady, the MVP front-runner gave Kansas City it’s first lead of the game on a 23-yard touchdown pass to, once again, Damien Williams. Mahomes would finish the game 16/31, passing for 295 yards and 3 TDs. However, another Sony Michel rushing score gave the Patriots the advantage once again, making the lead 24-21 with about three and half minutes left to play in regulation.

Kansas City’s offense responded again on the following drive, as running back Damien Williams continued to dominate in the fourth quarter, rushing for a 2-yard touchdown, giving him three total scores for the game. Brady came back, however, showing everybody why he’s considered one of the greatest to ever play the quarterback position. A 4-yard rushing TD from Rex Burkhead marked the fourth lead change of the quarter and gave New England the edge, 31-28. On the ensuing possession, with only 30 seconds remaining, Patrick Mahomes was able to drive Kansas City down the field and set up a game-tying, 39-yard FG attempt for Harrison Butker. He nailed it, and the game was headed into overtime.

The Patriots won the coin toss to begin overtime. If they scored a touchdown on the first possession, New England would be headed back to the Superbowl for the third straight season. Well, what happened? Tom Brady converted three consecutive third downs and drove the Patriots offense deep inside Kansas City territory. From there, Rex Burkhead did the rest, rushing for 2-yard TD, his second of the night, sending New England to their 9th Super Bowl appearance in the last 18 seasons. Brady and Patriots will now play the Los Angeles Rams on February 3rd in Super Bowl LIII down in Atlanta.