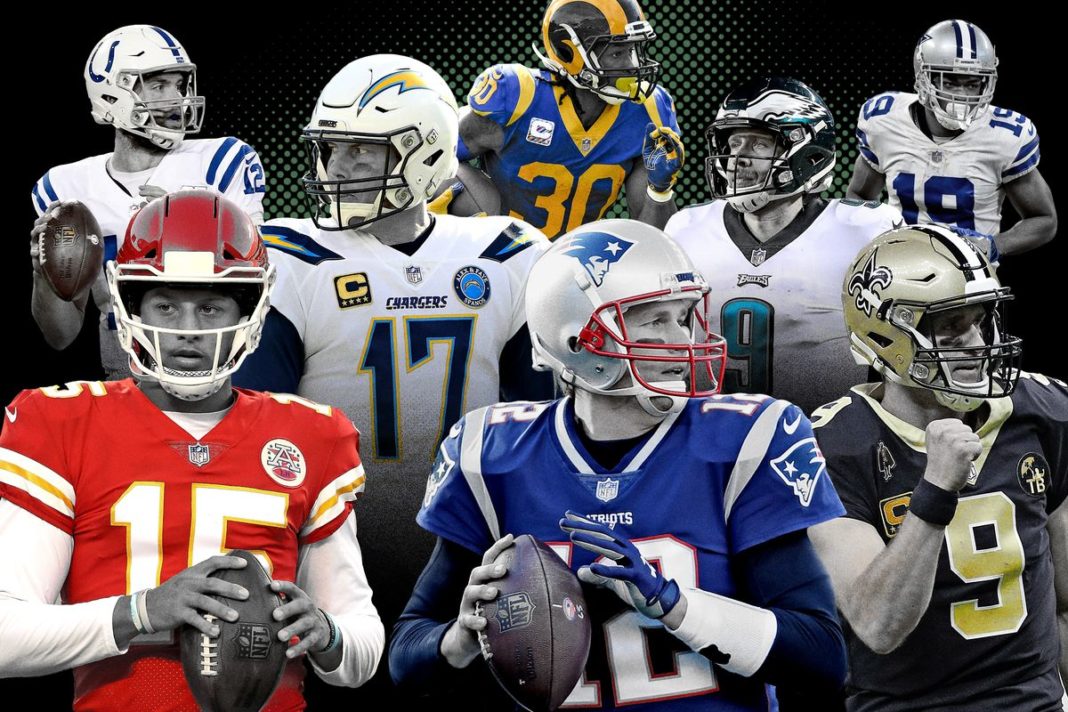 After a great weekend of playoff football, there is much to be reflected upon. The divisional round consisted of teams coming off bye weeks, as well as those who came in with hard-fought victories in the Wild Card round. Here is a round-up of all four of this week’s divisional round matchups and what the results mean for the rest of the 2019 NFL playoffs:

Wow. What a statement game for the Kansas City Chiefs. The AFC West Champions got off to a quick 14-0 start, after a 10-yard rushing TD by Damien Williams and a 36-yard TD run from Tyreek Hill. From there, they tacked on a 39-yard field goal from Harrison Butker early in the 2nd quarter. However, a blocked punt gave the Colts some momentum midway through the period, as the defensive TD put Indianapolis in a great position to get back in the game. Patrick Mahomes added a rushing TD of his own in response, stretching the lead for Kansas City to 17 before the half. Andrew Luck and Colts were able to drive down the field with under a minute remaining before the break, hoping to put some points on the board before the half. Nonetheless, Adam Vinatieri’s FG attempt from 23 yards out hit off of the left upright.

Up 24-7 with the second half underway, Patrick Mahomes and the Chiefs offense played extremely conservative football, handing the ball off to Damien Williams for much of the remaining time. Williams would finish with 129 yards and 1 TD on 25 carries. He also added 25 yards in the passing game on 5 catches. Luck struggled from start to finish, throwing his only touchdown pass to T.Y Hilton for 29 yards late in the fourth quarter. He finished 19/36 for 203 yards and 1 TD.

The Chiefs defense played a major role in the victory for Kansas City, as they had Luck under constant pressure and forced him to get the ball out early and often. Chris Jones, the star defensive lineman for the Chiefs, deflected three of Luck’s throws, and Justin Houston and Dee Ford were menaces all game long, combining for 3 sacks and 4 tackles for losses. A unit that struggled all season long to hold opposing offenses, the Chiefs defense stepped up in the season’s brightest moment and were major contributors in the victory. Patrick Mahomes finished 27/41 with 278 yards and no scores, as he became somewhat of a game manager after Kansas City’s early lead. The Chiefs will host the New England Patriots next week at Arrowhead Stadium in the AFC Championship game. This will be the first AFC Championship that Kansas City has hosted at home.

A close matchup for a majority of the game featured two of the NFL’s best running backs, with Ezekiel Elliott lining up for the Cowboys and Todd Gurley for the Rams. However, neither player had much of an impact in the first quarter. Los Angeles kicker Greg Zuerlein struck first blood early, hitting a 44-yard FG to put the Rams up 3-0. Dak Prescott and the Cowboys responded to this, however, with a 29-yard TD pass to Amari Cooper. Dallas looked as if it was rolling early, with both the offense and the defense putting together terrific drives to start the game. However, head coach Sean McVay and the Rams had other ideas.

Zuerlein made it 7-6 with a 23-yard FG early in the second quarter. On the following possession, the Cowboys punted, giving way to another Los Angeles drive. For all of the talk coming into the game surrounding Todd Gurley and his health, C.J. Anderson stepped up once again, rushing for a 1-yard rushing TD midway through the quarter. He finished with 123 yards and 2 TDs on 23 carries. McVay and the Rams offense did not stop there. Todd Gurley added a score of his own, rushing for a 35-yard TD with under 4 minutes left in the first half. He ended the game with 115 yards and 1 TD on 16 carries. The duo of Anderson and Gurley powered the Rams offense to a franchise record for rushing yards in a single game, with 273.

In the second half, the Cowboys offense experienced much of the same, as they struggled to put drives together and have their usual success in the run game. A Rams field goal early in the third quarter put them up 23-7. However, a 1-yard rushing TD by Ezekiel Elliott with 5:20 left in the period and a 2-point conversion to Cooper kept the Cowboys in the game, at least for the time being. Elliott finished the game with 47 yards and 1 TD on 20 carries. He also pulled in 2 receptions for 19 yards. A second C.J. Anderson rushing touchdown put Los Angeles up 30-15 with 7:16 left in the game, making it exponentially more difficult for the Cowboys to mount a late comeback. Prescott tried to imitate what he was to able to do against the Seahawks the previous week, rushing for a 1-yard TD on the following possession to pull the Cowboys within eight with just over two minutes remaining in the game. However, limited time prevented Dallas from receiving another possession, as Jared Goff and the Rams were able to run the clock out. Goff finished 15/28 with 286 yards and no scores, as a dominant game from the Rams running back tandem powered Los Angeles to victory. They will now head to New Orleans to face the Saints in the Superdome, in what should be an extremely entertaining game. The Saints beat the Rams 45-35 earlier this season in Week 9.

Who would have thought that two of the oldest quarterbacks in the NFL would be leading teams on playoff runs? Philip Rivers, 37, and Tom Brady, 41, are still at the top of their respective games even in the waning stages of their career. However, today, it was all Brady. The 5-time Super Bowl champion played like the Hall of Famer that he is, going 34/44 for 343 yards and 1 TD. An early touchdown run by Sony Michel set the tone for New England, as they ran for four scores on the ground in the game. Philip Rivers threw a 43-yard TD pass to Keenan Allen in the first quarter but struggled to put together efficient drives for the duration of the first half, as constant pressure from the Patriots front seven and great play from the secondary limited his chances to find open receivers. A 15-yard TD pass to Phillip Dorsett and three more rushing touchdowns for New England in the half, two of which came from Michel, put them up 35-7 going into the break. The Patriots rookie running back finished the game with 129 yards and 3 TDs on 24 carries.

In the first half, the defending AFC champs had more touchdowns than did the Chargers have first downs, leading 6 to 5 in that category. The second half consisted of much of the same. A Melvin Gordon 1-yard rushing TD was all Los Angeles could muster in the third quarter, as the Patriots dominated time of possession, having the ball for almost 40 minutes throughout the game. In the fourth, Rivers and the Chargers did not give up hope, as the 37-year-old signal-caller threw two touchdowns in the final minutes of the game to close the margin, a 1-yard TD and an 8-yard TD to Virgil Green and Antonio Gates, respectively. However, it proved to be too late. Philip Rivers finished the game going 25/51 with 331 yards and 3 TDs to go along with 1 INT. New England will now head to Kansas City to face the Chiefs on their home turf, Arrowhead Stadium, in a much-anticipated rematch from earlier this season between Tom Brady and Patrick Mahomes. Brady won the first matchup in Foxborough, 43-40. This will be the 8th consecutive AFC Championship game for Bill Belichick and the Patriots.

Well, the magic has ended. A run from Nick Foles and the Philadelphia Eagles that dates back to last year’s postseason stops in New Orleans, as Drew Brees and the Saints came to play today. The first quarter was all Philadelphia, as Nick Foles threw an early strike to Jordan Matthews for a 37-yard TD, then followed it up with a 1-yard rushing TD of his own. However, the first quarter was all of the offense the Eagles would compile, as they struggled to put anything together for the remainder of the game. Foles finished 18/31 with 201 yards and 1 TD, to go along with 2 INTs.

In the second quarter, the New Orleans offense finally woke up. Brees threw a 2-yard TD pass to Keith Kirkwood with 7:23 left in the half and Will Lutz added on a 45-yard FG in the final seconds before the break to cut the Eagles lead to 14-10. The second half consisted of more of the same, as the Eagles offense was stifled on consecutive drives, leading to another Brees touchdown pass, this time a 2-yarder to Michael Thomas to put the Saints up by three. Thomas made plays all game long, serving as Brees’ primary target. He finished with 171 yards and 1 TD on 12 receptions.

In the fourth quarter, a Wil Lutz 39-yard FG put New Orleans up by six. A wasted possession by the Eagles offense forced them to punt, putting the ball back into Drew Brees’ hands. Three huge penalties on the drive by Saints offensive lineman, Andrus Peat, stalled the possession and forced them to attempt a 52-yard field goal with just over 3 minutes remaining in the game. Lutz’s kick went wide right and gave Philadelphia one more shot at victory. “Foles magic” was alive and well. Nick Foles began the drive with great field position, as he was nearly over midfield. However, momentum ended as Foles’ third pass attempt of the drive went directly through the hands of wide receiver, Alshon Jeffery, and into the arms of Saints cornerback, Marshon Lattimore. A first down by Alvin Kamara on the ensuing possession sealed the victory for New Orleans. Drew Brees finished 28/38 with 301 yards and 2 TDs, along with 1 INT. He and the Saints will now host Jared Goff and the Los Angeles Rams next week in the NFC Title game. New Orleans last hosted the NFC Championship Game in 2009, a season in which they went on to win the Super Bowl.