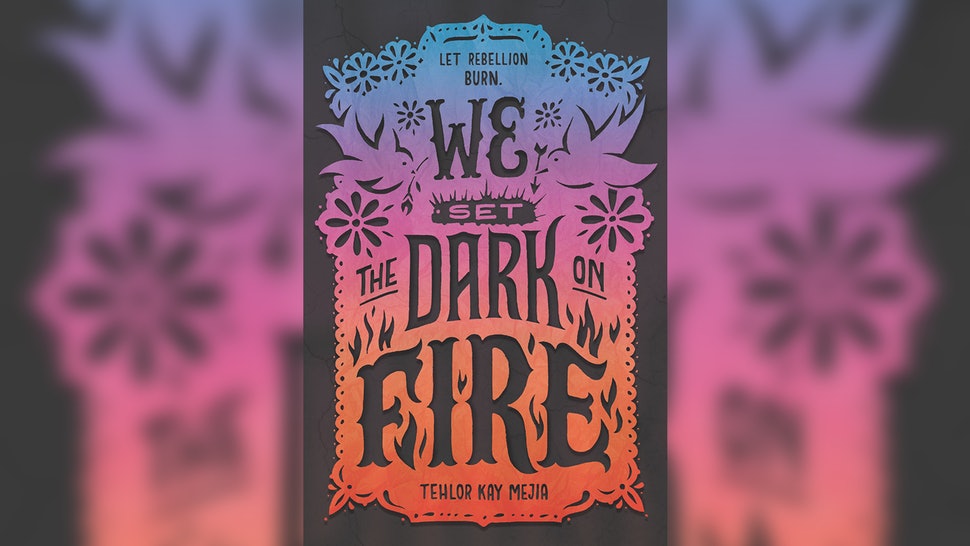 Today I am going to be reviewing We Set the Dark on Fire by Tehlor Mejia Kays. First of all, I want to thank Harper Collins for granting me a review copy of this book through Edelweiss. The concept for this book is absolutely awesome. Fierce ladies fighting against the patriarchy? Yes please. An own voices novel that highlights culture? I’m sold. Everything about this novel from the setting to the empowerment indicates that it should be phenomenal, so I’m not sure why I didn’t feel anything while reading this. I was definitely captivated and read it all virtually in 1 sitting, but there was a certain divide between me and the unfamiliar world Kays tried to set up. I could not make myself believe that what was happening should be important to me. What makes books great is that they are able to make the reader invested in things that aren’t really and wouldn’t matter to anyone not reading the book. Over here, I continuously felt like I should be head over heals in love with the book and was just truly missing out on what makes it click. No, the novel wasn’t bad in any specific way. It’s more that it was missing that final stage of development that would allow it to breach the reader’s life.

I appreciate how contained the plot of the story was. This author understood the boundaries she set for herself in the story’s setup and stuck to them. There weren’t any tacked on side stories or diversions. This plot continued on a straight path towards a set goal that didn’t shift that much, despite character changes. It’s a nice change to see such a streamlined, direct story. If I knew going into the book that the plot would be this simple, I would have definitely been turned off, but let me tell you, it was absolutely not a problem. All it indicates is that the author is focused. This choice made the story easy to follow and slip into. One thing I dislike consistently, not just with this book, is the idea of incorporating revolution. It’s been done far too often and usually comes off as cliche. I do appreciate the more political take on revolution in this book, although it wasn’t enough to make me fully believe in the cause.

The setting was incredible. I could easily visualize this new world and relished every opportunity to learn more about even the way things looked. I can’t remember the last time I was so infatuated and disgusted by a YA fantasy world at the same time. Unlike other YA fantasy books, Kays stripped away the romantic allure of living in an unfamiliar world and instead set up a grim society that unnervingly mirrored our own. If anything, I would recommend reading this book solely for that.

I won’t say much about the romance to avoid spoilers. In short, it’s unexpected, electric, and compelling. The depth of feelings escalated a little top quickly for my taste, bordering on insta-love. Then again, pretty much every YA romance escalates too quickly for my taste.

The narrative style was the most major problem. I loved the protagonist when accounting just for her traits and actions. However, when it came down to hearing her inner monologues, I couldn’t stand her. All of her thoughts revolved around the same two things over and over again. I understand her hardships and insecurities. Restating them with the same basic wording at every critical junction doesn’t aid my understanding in any way. In fact, it makes those things sound superficial. Rather than feeling the emotion of a moment, I would feel irritated at the way the event was being narrated.

The character development goes hand in hand with the narrative style. There’s that same sense of things being consistently repeated to the point where they’re so drilled in that I no longer care. Except with the character development, everything that had been established suddenly changed. The characters all made 180 degree turns to get into their positions to have a shocking ending. I didn’t even recognize the characters at the end because they most certainly were not the characters I spent a solid amount of time getting to know. Why bother making certain character traits that normalized when the plan is to destroy those traits 300 pages later? This is actually a pattern I’ve noticed with YA books. Certain traumas towards the end of the novel almost always related to a crazy plot twist change the fundamentals of a character’s personality. In reality, a switch doesn’t simply flip like that. A personality doesn’t get erased. It changes and for lack of a better word develops.

This story’s pacing was on the slower side (at least for the first half), yet it strangely didn’t bother me. With fantasy novels, especially the first in a series, it’s natural to expect a slower start. There’s a lot of world building and conditioning that needs to be done. So I’m not sure if I wasn’t bothered due to this expectation or due to the actual writing. I will say that the story does pay off once it sharply shifts to a breakneck pace. The contrast, which would normally make a story seem disjointed, appropriately mirrored the corresponding events and heightening intensity.

Perhaps the most important and carefully handled aspect of this book was its depiction of women. I love how several female traits were highlighted, giving everyone something to relate to. I could tell this author feels passionately for making women appreciated and taken seriously. While this book strongly features the patriarchy, it also features the average woman demanding her rights. Not a radical view. A simple, logical expression for why women matter just as much as men. I ended the book feeling empowered that ladies in a society that male-dominated were still able to make their mark. As cliche as it sounds, if they can do it, so can we.

This book is a difficult one to rate. On one hand, some aspects shone and I can’t wait to read the next book in this series. On the other hand, there are clear, amateur flaws. This book is a debut, so some of that is expected. As I spoke about at the start of this review, I wasn’t able to fall in love with the book the way I expected and wanted to. For that reason, I can’t give a rating higher than 3 stars. This wasn’t a bad book. In fact, I think many of the flaws I outlined here impact my reading experience more than it would for most. If you’re at all intrigued by the story, I recommend you give it a go. Despite some flaws, I don’t think you’ll be disappointed.