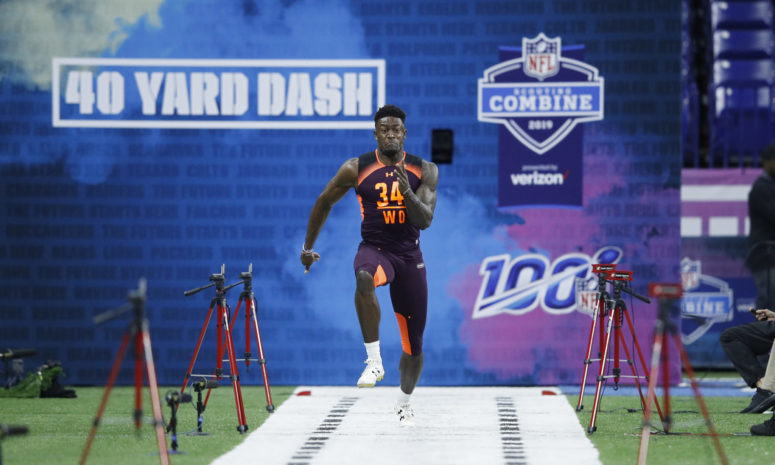 6’3, 228 pounds and 1.6% body fat are not measurements typically found in one athlete, but those numbers are the makeup of DK Metcalf. A picture of Metcalf in the gym showing off his stature surfaced just before the combine, and it got everyone talking. All eyes would be following the young receiver to see if his workout scores could be as impressive as his physical measurements, and he certainly did not disappoint.

Last year in his junior season at Ole Miss as one of the best wide receivers in college football, Metcalf’s name came with expectations. The first seven games of the season, Metcalf played like a top receiver, hauling in 569 receiving yards and tacking on five touchdowns to his stat line. However, after being sidelined with a neck injury that would put him out for the rest of the season, Metcalf’s NFL hopes were in danger. Luckily, he was cleared just two months ago, and the injury did not affect him at all in the combine.

27 on the bench press, a 40.5 vertical jump, an 11’2” broad jump and a 4.33 on the 40-yard dash are usually results for four different athletes. But on his combine day, Metcalf put up these jaw-dropping numbers. Metcalf placed in the top three in every combine drill, a feat rarely accomplished, and helped him steal the show. After a day to remember, and one that has him projected as the first wide receiver off the board, an emotional Metcalf made a call to his family and then explained to the media, “I’m not supposed to be here right now because of my neck injury… but just to be able to have this opportunity to perform is a blessing,”. A mirror image of both a young Julio Jones and Calvin Johnson, Metcalf believes he can dominate the league come September.  If his athleticism at the combine is indicative of what he can do on the field, then NFL defensive backs should already be shaking in their cleats.