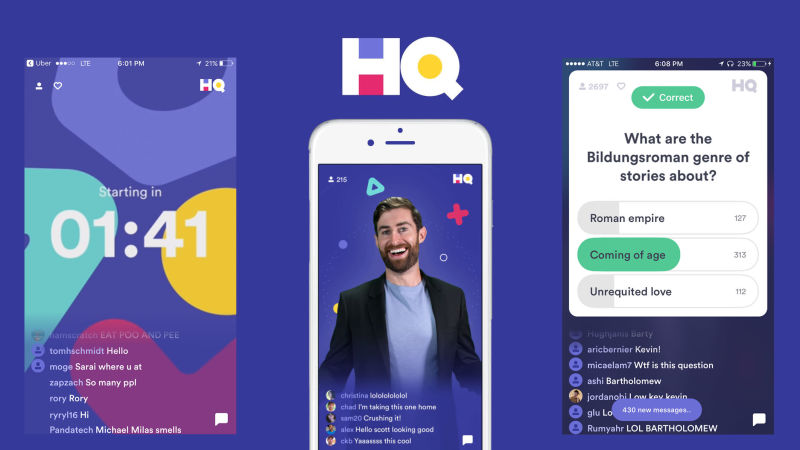 Notice: In the name of good reviews, this is NOT a paid promotion. Studio 462 and/or Daniel Sirota were NOT paid to review HQ trivia, and this article is based solely on the thoughts of the author.

Have you heard your friends talking about something called “HQ” recently? Are they watching a bearded guy ask ridiculously hard questions to an audience of more than 600,000 people? Well, if you know what I’m talking about here, then you definitely know that this live trivia app has been going around Millburn High School like the flu (but in a much better way than feeling like crap).

HQ Trivia is a trivia game show app on iPhones and Android phones. Here’s the catch, though: it’s a live trivia game show, and that means that you have to catch it when it’s live (3 PM weekdays and 9 PM every day), or else you miss out on the fun. This has caused many high schoolers to actually “tune in” to something for the first time in years. The show is hosted by comedian Scott Rogowsky, but they have also had guest hosts like Ben Gleib and Jason Silva.

(By the way, if you’d like to download HQ and play for yourself, you can do so by clicking here. Also, enter my referral code TheRealDanSir when you sign up!)

The rules of the game are simple: Scott asks 12 questions, and you have 10 seconds from the time he starts reading the question to tap one of three answers on your screen. If you answer incorrectly or don’t answer in time, you’re eliminated from the game. This process continues until the 12th question, and those who are still in the game (remember, these questions are hard) get to split a cash prize. There’s a minimum prize amount of $2,000, but the prize money has reached as high as $18,000 (New Year’s Eve game). However, since that can mean that hundreds or thousands of winners have to split the cash, you may only get $5 or so. However, this app is still a blast. Once you accrue $20 in winnings, you can cash out directly to a PayPal account.

If you want an extra chance at the game after answering a question wrong, HQ offers “extra lives.” These extra lives are gifted to you when you refer a friend to the game, and they play their first game. When your friend joins, he/she enters a referral code that you give them, and then you’re given an extra life in the game. This helps increase your chances of winning the game.

Like any app, though, HQ has also seen its fair share of bugs and glitches. During the 3 PM game on December 22, the first question was mixed up with the eighth question, and as a result, the game ended abruptly and restarted about 30 minutes later, leaving many users frustrated. The question was about Middle English and The Canterbury Tales, and part of the reason as to why so many were upset was because it wasn’t a difficult question for many (I was playing, and my mom happened to know the answer). People were also upset that the game producers didn’t say “Oh, well” and keep moving with the questions. However, the biggest issue by far is that many phones lag behind, causing people to be eliminated. They couldn’t answer a question due to their phones not staying in line with the stream’s pace. However, after December 22, there have been very few problems with the app.

In summary, if you love trivia and live TV, then HQ Trivia is definitely the app for you! HQ is the first app of its kind to offer live trivia and cash rewards, and its popularity skyrocketed in recent months. Despite its occasional problems here and there, the experience and adrenaline rush you get from playing HQ is 100% worth it.