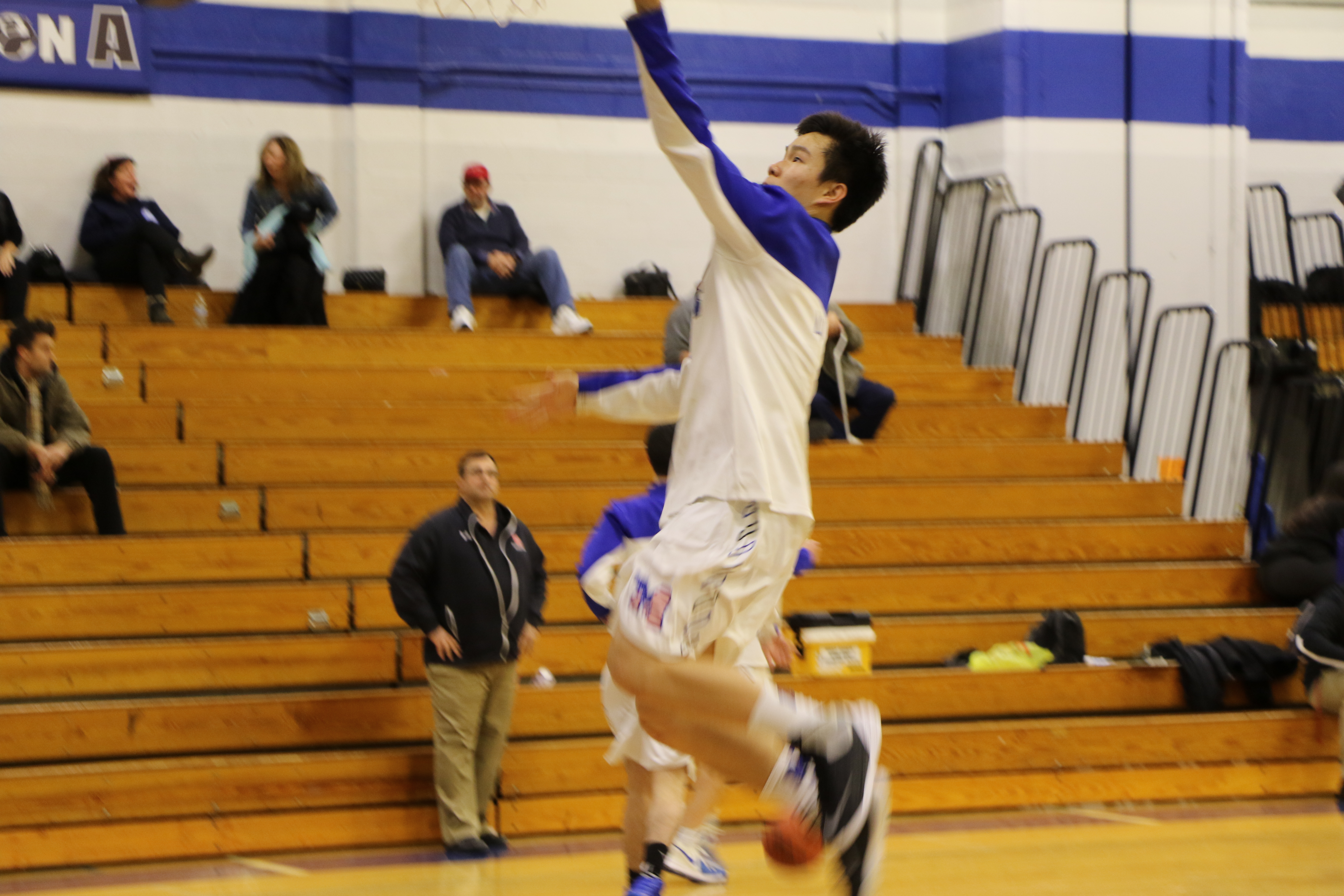 Millburn, NJ- The Millburn Millers bounced back from a heartbreaking loss against Verona and defeated Nutley 52-39 in a dominating victory. Zach Ravitz led the way with 21 points and a handful of blocks and steals, while Charlie Levison added 14, and Ross Gang chipped in 11. Millburn, playing in the Colonial Division, has a significantly harder schedule than the Raiders, and their experience showed today as the Millers came prepared. The Millers were fired up before this one even started as many of the players wanted to shake off the one point loss to Verona, and get revenge on these Raiders from last year’s 47-44 loss here in Millburn.

Today’s game couldn’t have had a better start for the Millers, forcing two turnovers on the Raiders’ first two possessions and capitalizing on the other end, including a Zach Ravitz dunk in transition. The Raiders’ coach called a timeout after that, and the crowd never settled down. Millburn then went on to expand the lead to 8-0, with the Raiders committing four turnovers in the first five minutes of the game. Finally, sophomore Marty Higgins drained a Steph Curry-like 3. The big story in the first quarter was the shot selection from the two teams. Millburn feasted in the paint as they usually do, and no one was big enough to defend Ravitz. Because of Ravitz’s blocks early in the game, the Raiders were afraid to shoot inside and they settled for long 3 pointers. The Raiders began to hit their deep shots and ended the first quarter down 13-8, with Higgins scoring all the Raiders’ points.

The script flipped in the second quarter where the Raiders tried so hard to prevent any buckets inside that they let the Millburn shooters rip it from downtown. They gladly accepted the challenge and scored 15 points in that quarter, all of which was from beyond the arc. Matt Schettino, a senior who scored 25 points in last year’s game between these two teams, was held scoreless through a quarter and a half until he drained a 3 pointer in transition. Although he was cold from the floor throughout the first half, he kept his aggressive mindset and it paid off in the fourth quarter. The same story was intact for Millburn’s leading scorer Ross Gang, as he had 3 points entering the break and ended the game strong. Millburn led 28-20 at the half. Ravitz had 14 points entering the third quarter.

Zach Ravitz asserted his dominance once again in the third quarter, quickly scoring five straight points for the Millers to begin the second half including his fourth 3 pointer of the game, which matched his season total entering today. The Raiders then made an adjustment that looks good on paper, but didn’t end well for them. The Raiders doubled Ravitz at all times when he had the ball and that stopped the scoring from Ravitz, but it led to the scoring of all the guards for Millburn, such as Levison, Gang and Adam Liu. Because of all this doubling, the Millers scored their points on uncontested layups through great ball movement. Oddly, the Millers went to the free throw line for the first time in the third quarter and Ross Gang made both foul shots. On the other side of the court, the offensive struggles continued for the Raiders, as they hoisted deep 3 point shots and couldn’t find the bottom of the net. Turnovers were the story of the game, as the Millers constantly intercepted forced passes. The Millers doubled their lead to 43-27 at the end of the third quarter.

To start the final period, the Raiders committed back to back turnovers, including an inexcusable backcourt violation. Gang hit a lot of shots in the paint to expand the Millburn lead. All of a sudden, the star woke up for the Raiders. Schettino hit a 3 pointer in transition, and on the next possession hit another 3 with great defense on him. A few possessions later, Schettino had an impressive finger roll with tight defense in the paint. It was too little, too late as Ravitz continued to display his arsenal of passing, which included passing out of numerous double teams and even a few long outlet passes. Millburn lived in the paint once again, and like typical Millburn, they had the chance to shoot 3 pointers and passed them up for the higher percentage shot. Schettino received no help in the final quarter as Higgins didn’t score after the first quarter. Anthony Fabiano who came into the game averaging over 10 points per game missed a lot of mid range jumpers and wasn’t aggressive enough inside with his tall figure.

Although Millburn was outscored in the frame, they won the game and advanced to 9-1 and a three way tie for the division lead with Bloomfield and Orange. Nutley dropped to 5-4. Millburn will to travel to face division rival West Essex for a second time this season on Tuesday. Millburn won 43-34 against them on opening night.