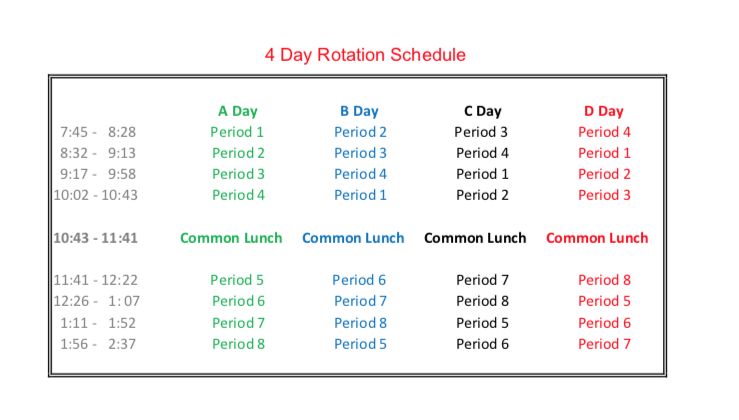 After 3 days of the rotational schedule, I thought I should take a look back and reflect to figure out what worked, what didn’t work, and whether this schedule would work for next year.

Before Wednesday, I was cautiously optimistic about what a new schedule would bring. Nothing was official or permanent yet, so why not be open-minded about what was to come? I found myself already feeling stuck in monotonous routine – at the end of September. Changing the order of classes could freshen up that dreariness, making each day a little newer.

Subconsciously, that can really make a difference, especially with student level of enthusiasm during classes. Let’s also not forget how the schedule change could potentially clamp down on cheating, an endemic problem in Millburn.

I didn’t feel lighter or more excited to conquer my classes. I was getting hungrier and more tired during the day, not to mention, more irritable. Talking to friends, I found they all felt the same heaviness weighing them down, making it more difficult to focus on class. All we could think about was when the school day would finally end.

These feelings always exist in students, to an extent, but they usually lie dormant until a particularly bad day. During the past 3 days of the rotational schedule, those feelings suddenly started working full time.

The one part of this change that truly worked was knowing the order of my classes. Not once did I forget where I had to go. I expected to need to pull out my phone between classes to double check where I should walk (or run).

Yet, the amount of written, verbal, and visual reminders was enough to remember the order without any stress. I anticipated seeing kids, or myself, walking into the wrong classes and having to shamefully find the right one. That was not the case at all, which should be acknowledged.

The mindset I’m trying to maintain now is that this schedule change is an adjustment. Maybe these next 2 weeks won’t be enough to actually get used to a system we’ve gotten used to over the past 4-7 years. However, that doesn’t mean this system isn’t the one our school should adopt. The only reason we feel certain classes belong closer to end of day is because those classes were closer to end of day for the past month.

If school year started fresh with a rotational schedule, we wouldn’t have that same feeling, at least not to the same degree. I’m willing to do near anything to get an extra 30 minutes of sleep in the morning, and if this schedule is what it takes to make that happen next year, it’s worth it.