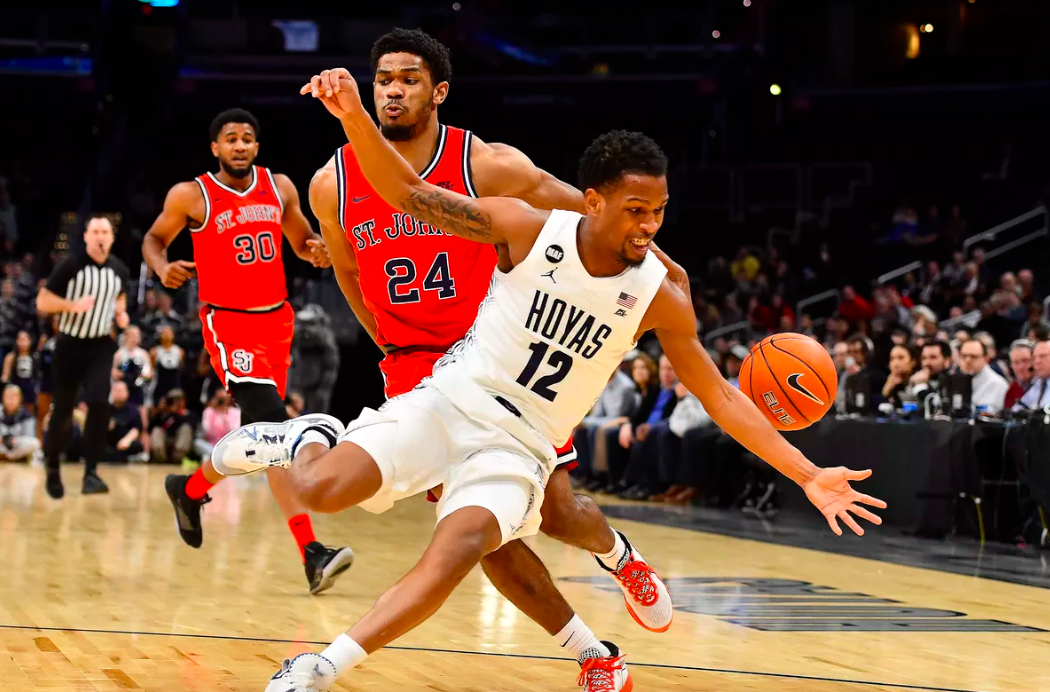 MADISON SQUARE GARDEN, NY – After an exceptional first-half performance in which Georgetown led by as many as 10 points, sluggish play after the break proved fatal for the Hoyas, as St. John’s managed to turn the tide in the second period to win the first game of the 2020 Big East Men’s Basketball Tournament, 75-62.

Georgetown had a terrific first half to begin tournament play, hitting on 40.0% of their threes and 54.5% of all field goals before the intermission. Terrell Allen and Jamorko Pickett led the way for the Hoyas, scoring 18 and 11 points, respectively.

Patrick Ewing’s team had also outrebounded the Red Storm by halftime, 22-16, seemingly dominating all facets of the game after back-to-back threes from Pickett and Allen opened the door for a 10-0 Georgetown run prior to the break. Heading into the second half, the Hoyas looked to be in total control, up 42-33.

The final 20 minutes reflected an entirely different narrative, as Georgetown struggled to get shots to fall and displayed a lack of energy while playing with the lead. Whatever St. John’s Coach Mike Anderson said to his team in the locker room translated onto the court, as the Red Storm ended the game with 23 unanswered points to secure the victory.

Speaking with the media after the game, Coach Ewing, Terrell Allen, and Jagan Mosely gave their thoughts on the final result.

Terrell Allen gave the Red Storm credit for their incredible second-half comeback, while also reflecting on his time at Georgetown.

“St. John’s, they played hard and they fought throughout the whole game. Credit to them. I’m just glad I was able to play with Coach Pat, great coach. With everything that he went through this year he continued to make us believe and continue to keep fighting every single day. And then playing with Jagan, he’s one of the best teammates I’ve ever played with. Gave it all every day in practice, in weights, in the game. I just thank Georgetown.”

With the loss, the Hoyas finish the season 15-17, while St. John’s advances to the next round of the Big East Tournament and will face No. 1 Creighton tomorrow at 12:00 pm.